A compelling story of strength, perseverance, and the will to survive, THE COMFORT BEARER by
Cathy L. Patrenos, Author 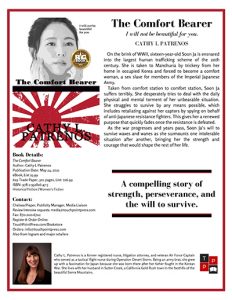 On the brink of WWII, sixteen-year-old Soon Ja is ensnared into the largest human trafficking scheme of the 20th century. She is taken to Manchuria by trickery from her home in occupied Korea and forced to become a comfort woman, a sex slave for members of the Imperial Japanese Army.

Taken from comfort station to comfort station, Soon Ja suffers terribly. She desperately tries to deal with the daily physical and mental torment of her unbearable situation. She struggles to survive by any means possible, which includes retaliating against her captors by spying on behalf of anti-Japanese resistance fighters. This gives her a renewed purpose that quickly fades once the resistance is defeated.

As the war progresses and years pass, Soon Ja’s will to survive waxes and wanes as she surmounts one intolerable situation after another, bringing her the strength and courage that would shape the rest of her life.

The Comfort Bearer by Cathy L. Patrenos is a historical fiction novel that delves into the often-unexplored subject of comfort women during World War II in Japan and the surrounding territories. Soon Ja is coerced from her home in Korea with promises of work in a Japanese silk factory. Little does she know she’s about to be put into essentially what is human sex slavery under the auspices of the ‘comfort women’ scheme developed by the Japanese government. There is a suspicion that if a soldier has sex before he goes off to war, he will live, so this is the government’s way of keeping their soldiers in line. Soon Ja, however, isn’t going to be resigned to her fate and keeps fighting to find a way back home. Will she ever be able to return to the life she once knew or will shame keep her from seeing her family again?

War is never pretty or glamorous, and the story of the comfort women is often glossed over when it comes to discussing World War II on the Pacific Front. The Comfort Bearer by Cathy L. Patrenos breaks down these barriers with her harrowing story of Soon Ja. As someone with Korean heritage, I have often been told how Japan invaded Korea and caused much repression and devastation to the Korean people. Soon Ja’s spirit reminded me so much of my own grandfather’s mantra; bend in the wind, but never break. It was so wonderful to see the people who attempted to help her along her way, trying to free her from this brutal slavery. This novel is raw, unapologetic, and hopefully will open readers’ eyes to how harsh it was for these comfort women during the war, and even after, when they were often shunned by their own families. I would highly recommend this novel to anyone wanting to know more about the Pacific Front during World War II and comfort women. Bravo to the author for tackling such a graphic topic with sensitivity and compassion for the women who suffered so much.

Reviewed by Amy Lignor for ReaderViews.com

My mother was a career librarian who read it all. However, anything (and I mean, anything) about or set in the WWII period was her absolute favorite reading material. I followed her mindset in this and truly believed that I had read everything about WWII—the various points of view, paths taken, stories told regarding all other countries and people who had to fight against that tyranny—that had been written. Yet, when this tale came to me, I realized perhaps I had just scratched the surface of this time period, because this book by Cathy Patrenos is one of the most captivating, dramatic and almost… beautiful stories about a protagonist during WWII that I’ve ever read.